Tesla humanoid robot “Optimus” prototype appeared Cute Girl Anime Wallpapers
Under the conflict between Russia and Ukraine, the Western sanctions against Russia continued to increase, and the crude oil price soared, which forced the Biden government to turn its attention to Venezuela, the crude oil exporter. At the same time, this also makes how Venezuela views its relations with the United States and Russia a focus topic.   On March 12 local time, Venezuelan foreign minister prasencia was interviewed by Turkey’s Anatolia news agency during the meeting of the Antalya diplomatic forum in Turkey. He said that it was “not surprising” that the United States and Venezuela carried out oil trade, and it was “nothing new” for a high-level US delegation to Venezuela to discuss oil trade.   At the same time, he also stressed that Venezuela is Russia’s “loyal ally”. In this regard, both TASS and Russia today (RT) reported the interview remarks of prasencia. RT pointed out that “Venezuela is ready to sell oil to the United States again and maintain ‘loyalty’ to Russia.”

Screenshot of Turkey Anatolia news agency   It is reported that in an interview with the Anadolu news agency earlier on the 12th, prasencia said that Venezuela is ready to cooperate with the United States in the oil field, but on the premise that Venezuela’s sovereignty must be duly respected.   “I hope they respect the sovereignty and legitimacy of our government. President Maduro is the only legitimate leader of the Venezuelan government. If we can convince them to respect this, we can achieve great results in the field of oil trade.” Prasencia said that recently, the high-level delegation of the United States visited Caracas, the capital of Venezuela, at the request of the U.S. government. He stressed that the cooperation between the two countries in oil will be of historical significance.   “It’s not surprising to talk about the oil trade between American oil companies and Venezuelan oil companies.” Prasencia pointed out that Venezuela has the world’s largest oil reserves and one of the largest natural gas reserves. President Maduro has always welcomed American oil companies to develop and invest in oil trade in Venezuela and has never forced American enterprises to leave the country.   When talking about the importance of the visit of the high-level U.S. delegation, he said: “it is important that (the U.S. government) ask them to visit Venezuela and discuss this matter, but this is not entirely unexpected or new, because we have been trading oil with Americans for a long time.” 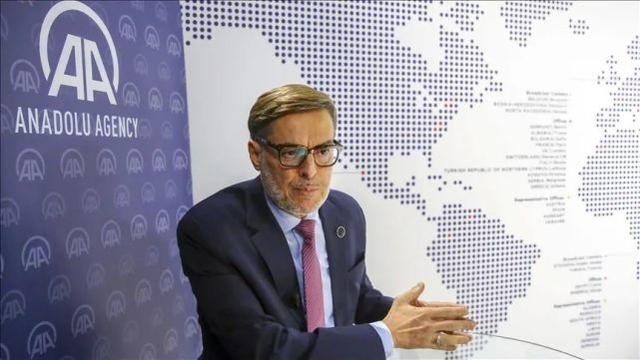 Venezuelan foreign minister prasencia interviewed, pictured from local media   Speaking of domestic oil production, prasencia said that there was still much room for expansion. “President Maduro told the media that now we produce 1 million barrels a day. We hope to produce 2 million barrels a day by the end of this year. We are working hard to achieve this production goal.”   Prasencia pointed out that Venezuela will rely on its own partners to do this, including “partners from Russia, China, Iran and the rest of the world”, and described them as “reliable and good partners”.   Referring to the situation in Russia and Ukraine, which has been the focus of attention recently, prasencia believed that peace is the only way to move forward. “We are loyal allies of the Russian government. We believe that Putin is a responsible head of government. We respect him as a member of the international community. We believe he will do the best for the Russian people.”   Tass news agency, RT and other Russian media have paid attention to and reported on the interview of the Venezuelan foreign minister, especially the part involving Russia.   Tass News Agency reported that the Venezuelan foreign minister reiterated in an interview with Turkish media that the Venezuelan government is still Russia’s “firm ally”; RT pointed out that this interview with prasencia means that Venezuela is ready to sell oil to the United States again, but remains “loyal” to Russia at the same time. 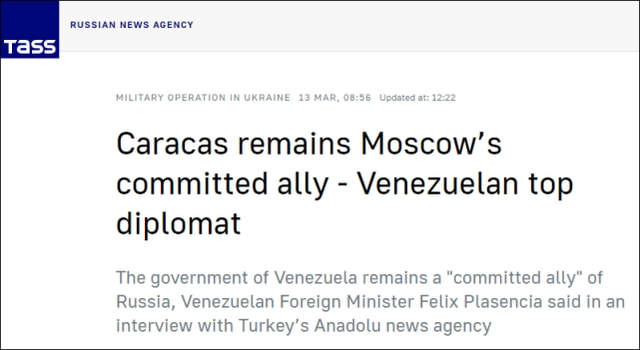 Screenshot of RT Report   Since the escalation of the conflict between Russia and Ukraine, the United States has banned the import of Russian energy, but this has led to rising domestic oil prices. Against this background, the Biden administration began to find Venezuela, and the previously strained relations between the two sides showed signs of further loosening.   According to previous reports by the Wall Street Journal and Reuters on March 9, informed sources said that US officials proposed to allow Venezuela to export oil directly to the United States in exchange for relaxing us oil sanctions against Venezuela. The two sides also discussed Venezuela Russia relations and Venezuela’s domestic politics. Although the talks “made no progress”, the two sides agreed to further negotiations. 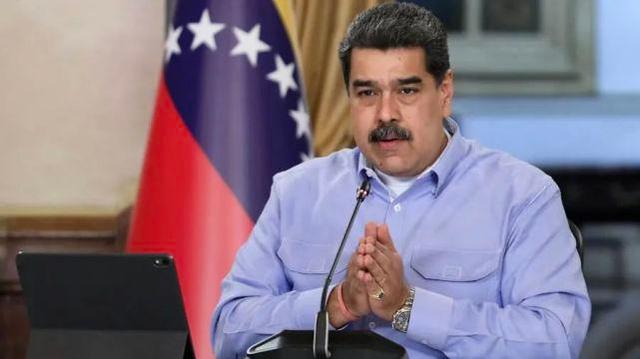 Maduro confirmed on March 7 that he was in contact with the U.S. government, and the official twitter of the news of the president of Venezuela   On March 9, the White House issued a statement that Venezuela released two arrested Americans. Venezuelan President Maduro said that the American and Venezuelan flags “look beautiful together”. However, the Biden administration’s move to find Maduro’s government was scolded by many people in China.   On March 10, Venezuelan vice president Rodriguez tweeted that she had a meeting with Russian Foreign Minister Lavrov in Turkey on the same day. The two sides discussed the international situation and bilateral strategic cooperation.   Rodriguez also forwarded RT’s report on the meeting. The report said that during the talks, the two sides agreed on current international hot issues, were satisfied with the development of bilateral strategic cooperative relations, and severely condemned hegemonism and unilateral sanctions.